The realities of modern Chinese culture remain unknown to much of the world. Even in an age of unlimited access to knowledge, many still get their information about China from articles on Tiger Moms or Crouching Tiger, Hidden Dragon. Contrary to the very popular belief about Chinese people, they are not all tigers. And some of them don’t even know how to hold a kung fu battle in the sky.

Today’s China is rapidly shedding the traditions, beliefs, and–in consequence–aesthetics it has perennially been associated with. Soon enough, the dated concepts of China’s art as merely minimalist watercolor landscapes or calligraphy on foldable fans will evaporate. Works like the following, from artists who are challenging, complex, and eclectically influenced, will obliterate the classical definition of a “Chinese Artist.”

When growing up in China, Xiang Gao was simultaneously obsessing over rock n’roll & western art and training in Chinese traditional painting. Now he’s invaded the San Francisco art world, and creates work that can be labeled neither eastern nor western, but can be labeled wry and eye-opening. Gao’s eccentric paintings on rice paper are arguably the most successful collision of eastern and western tastes since sriracha was mixed with mayonnaise.

No, that’s not your your webpage still loading. The above are Wei Linyuan‘s completed oil paintings.

Chuck Palahniuk, the author of the novel Fight Club, once wrote that “art never comes from happiness.” But that statement is untrue, and also pretentious. In fact, the Milan-educated Wei Linyuan, whose work has been widely shared on Tumblr, derives inspiration for her fun oil paintings from “the happiness that everyone experiences in life.” And Wei’s work might just have a better legacy than the novel Fight Club, as a movie about a digital banana will definitely not be better than its source material. 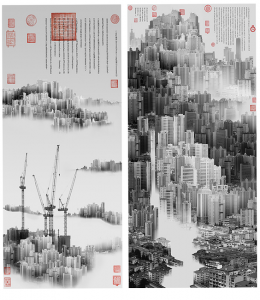 Shan shui is the Chinese art of painting land and mountainscapes with both a brush and a rich philosophical guideline based around nature’s elements. Yang Yongliang, a masterful practitioner of Shan Shui painting, has spent a lifetime closely observing Chinese vistas, before seeing them heartlessly razed during China’s modernization. Yang’s belief is that “The development of our cities is at the expense of nature,” and his shan-shui style renderings of cityscapes could not make that view any clearer.

Yue Minjin has created an army of laughing figures, whose faces he based on his own. The dark satire of Yue’s paintings often comes from the juxtaposition of revelry and tragedy, as seen in Execution, above. The laughter of his subjects may not be guffaws of joy, but instead cackles of derangement toward a society’s senselessness. Less Pillsbury Dough Boy, more the Joker. Execution was sold at £2.9 million pounds (US $5.9 million), making it the most expensive contemporary Chinese painting ever. When asked whether the painting being set in China was a critique of Chinese history, Yue astutely replied that whatever his political impetus, “I want the audience not to think of one thing or one place or one event. The whole world’s the background.” 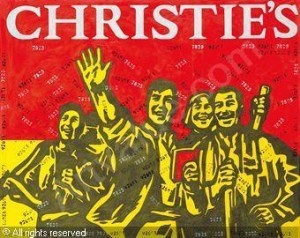 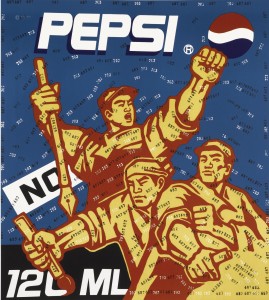 Wang Guanyi is another artist who’s made millions from his singular pop aesthetic. Wang’s works are often auctioned at such Old Money bastions as Sotheby’s and Christie’s—yeah, he knows, he’s hypocritical. Mixing major brand logos with political posters, Wang Guanyi asserts that whether they’re used to propagandize or advertise, the techniques for controlling a population are everlasting and universal: repeatedly flood the people with your symbols, slogans, and self-praise, until they cannot help but admire you. This blog post was sponsored by Pepsi.