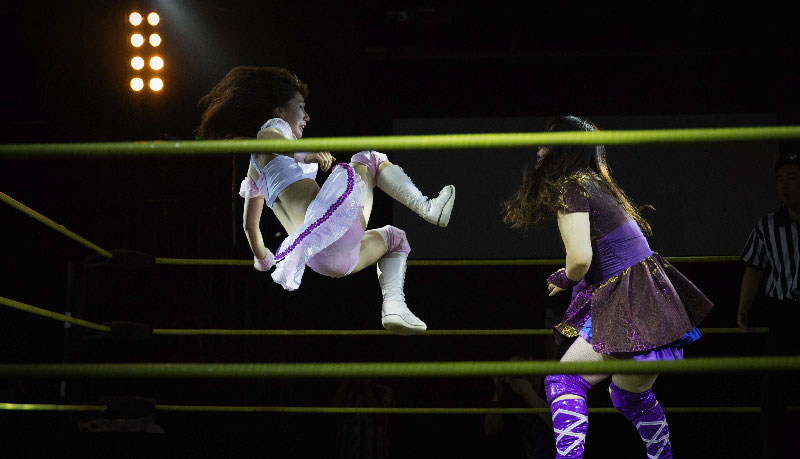 The Rise Of Chinese Pro Wrestling

“You SUCK, you SUCK!” The sparse crowd of seventy that has ventured to a repurposed gay nightclub on this stifling May evening is beginning to find its voice.   Middle Kingdom Wrestling World Champion Dalton Bragg prowls the ring, glaring through black eyeliner at the Chinese men abusing him in English. A few paces behind, The Selfie King’s blood-splattered chest heaves as man-mountain Big Sam hauls him into the air and dumps him on to the canvas.

“Wrestling is Shakespeare for the modern age”, yells Nikk Mitchell over the chants and sporadic crashes of body on mat. The managing partner of Middle Kingdom Wrestling (MKW), the collective that has provided four fighters for tonight’s show, has just returned to his ringside seat after an altercation with the referee. “Nowadays theatre is so highfalutin”, he shouts, “Back in the day, it was super lowbrow. People would throw fruit at the actors. Wrestling is one of the few art forms left in the world where audience participation is a major aspect. That’s what makes it so special.” 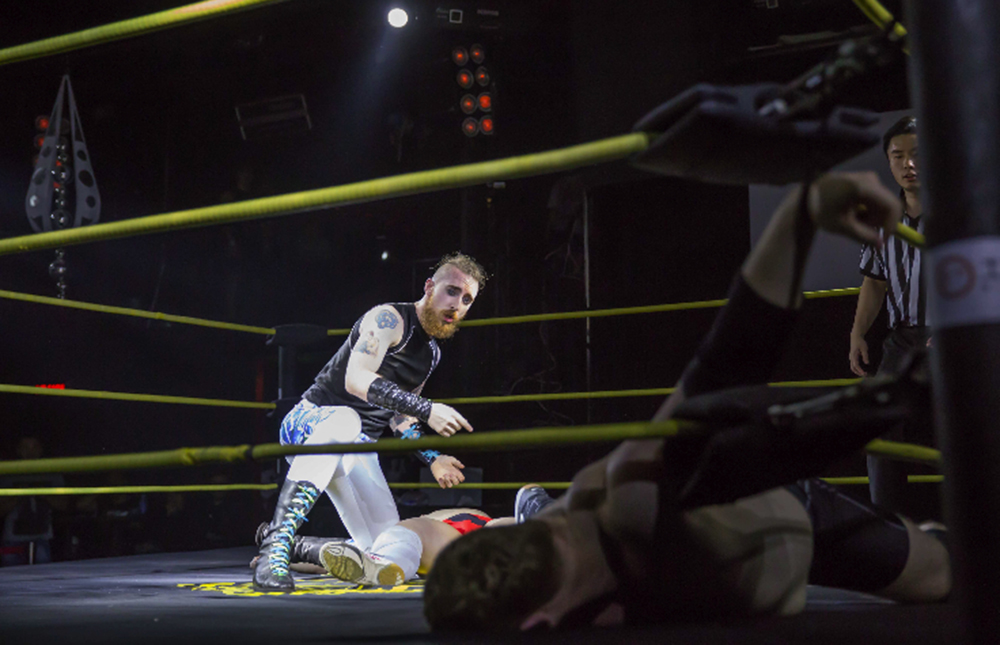 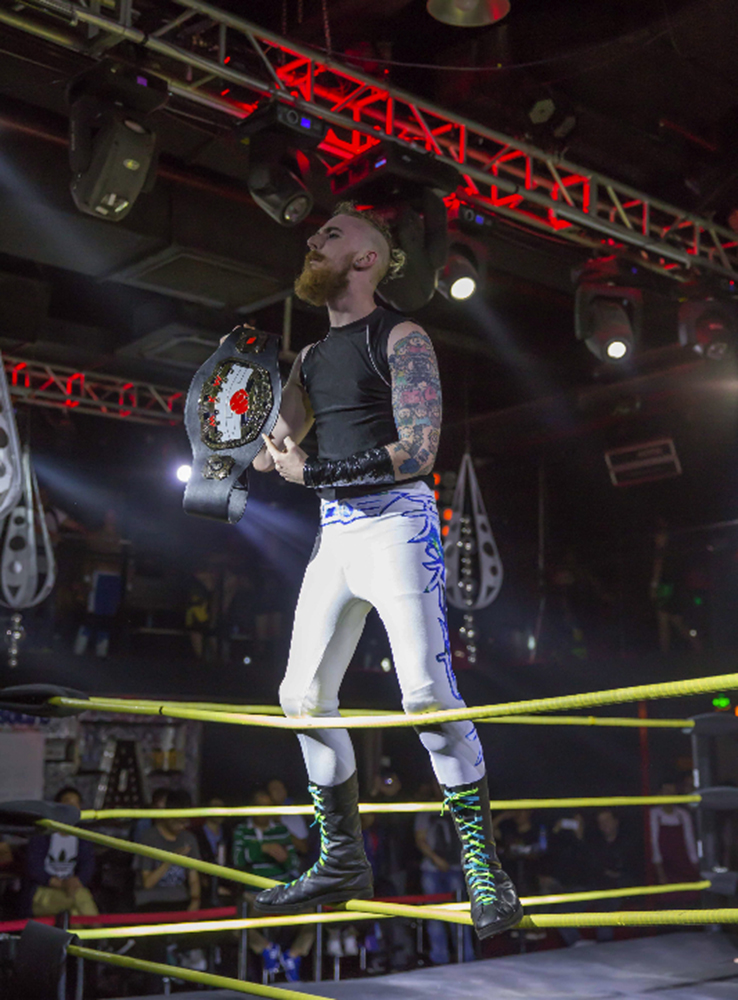 Build It And They Will Come

To be clear, Mitchell is talking about storyline-driven, scripted, and choreographed pro-wrestling, the entertainment art form combining athleticism with performance that the ill informed deride as ‘fake’. Originated in the US in the mid-20th century, Japan leads the Asian scene, albeit in a more legitimate sport-like form, while Singapore, Korea, Taiwan and Hong Kong all boast leagues with some degree of popularity and pedigree.

Mainland China remains a sleeping giant, with a lineage going back only as far as 2004, the year that Guangdong wrestler, known as The Slam, left for Korea to hone his craft. On his return to Dongguan, he constructed a mobile professional ring and trained up a group of local Chinese talent that he would later formalize into Chinese Wrestling Entertainment. His traveling arena became the home of CWE’s semi-regular live shows and the shoot location for their online TV show. 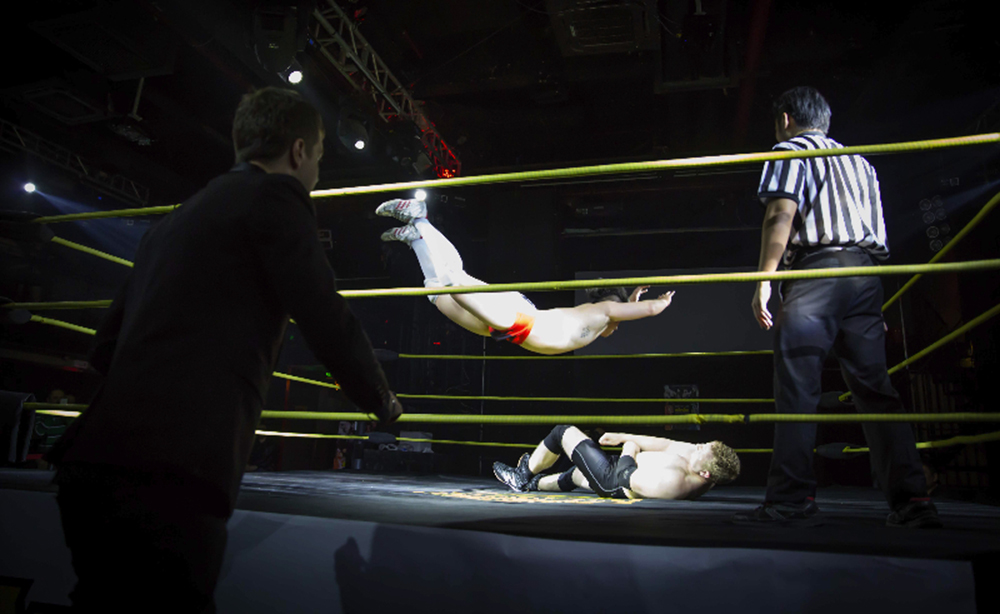 Chinese wrestling has endured stuttering beginnings, perhaps best exemplified by the events of October 2013, when Paul Wang, a wrestling super-fan with dreams of building a league to match America’s WWE, invited an assortment of local and international wrestlers to Chongqing for four live shows.  After promising big money investment and a glamorous future, Wang botched the operation, cancelled half the shows and disappeared, leaving the wrestlers to pay their own airfare home.

After multiple false starts and isolated shows, the past 18 months have seen a shift in gear. In early 2015, The Slam received a call from Adrian Gomez, an American expat launching a Chinese pro wrestling promotion and wanting to discuss a partnership. Gomez spent the proceeding months building a roster of talent to form the basis of Middle Kingdom Wrestling. MKW’s first show took place in Dongguan in July 2015, followed by a larger winter showcase featuring wrestlers from the US, UK, Hong Kong and Singapore.

Forming around the same time was China’s other main aspiring promotion, China Wrestling Federation (CWF), founded by Fei Wu Xing, the boss of China’s largest wrestling website ShuaiJiao.com.  CWF held its first show in Shanghai earlier this month featuring their own wrestlers and others hired from MKW. 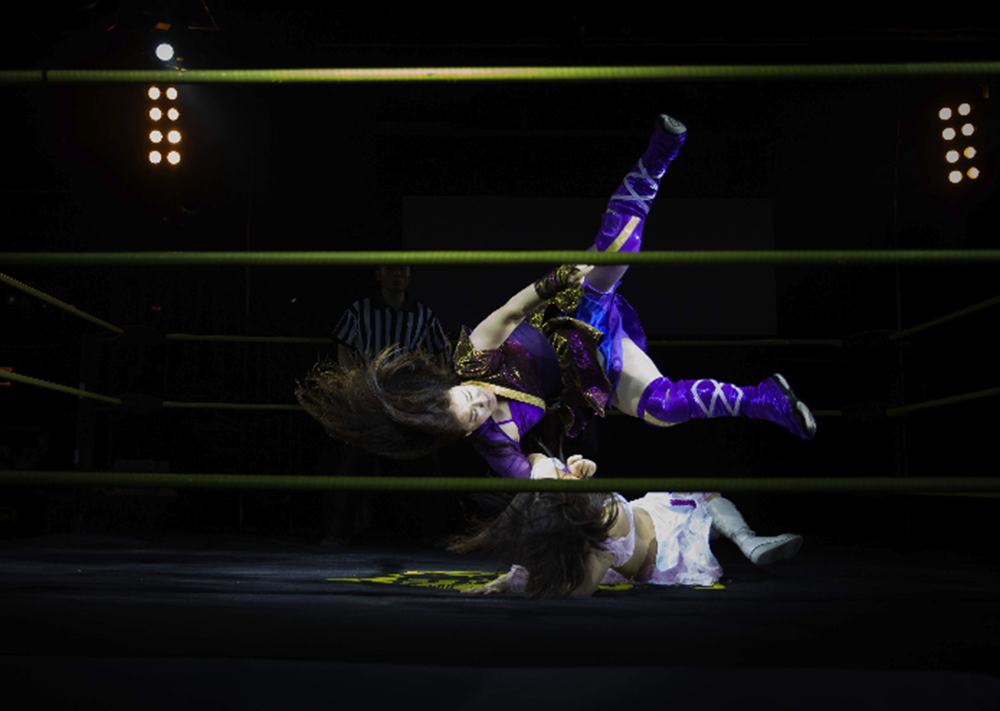 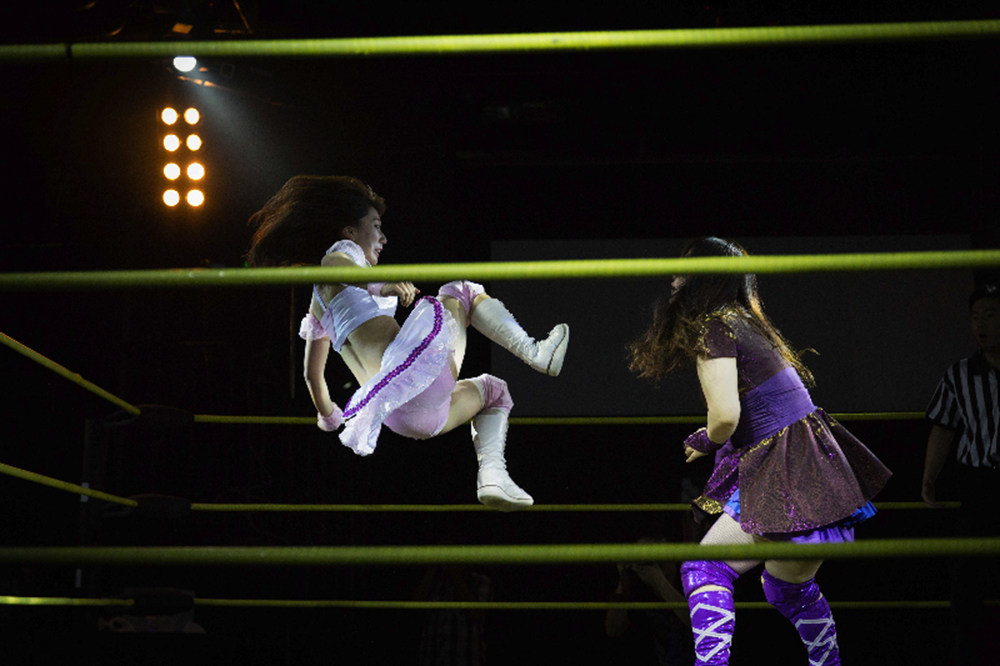 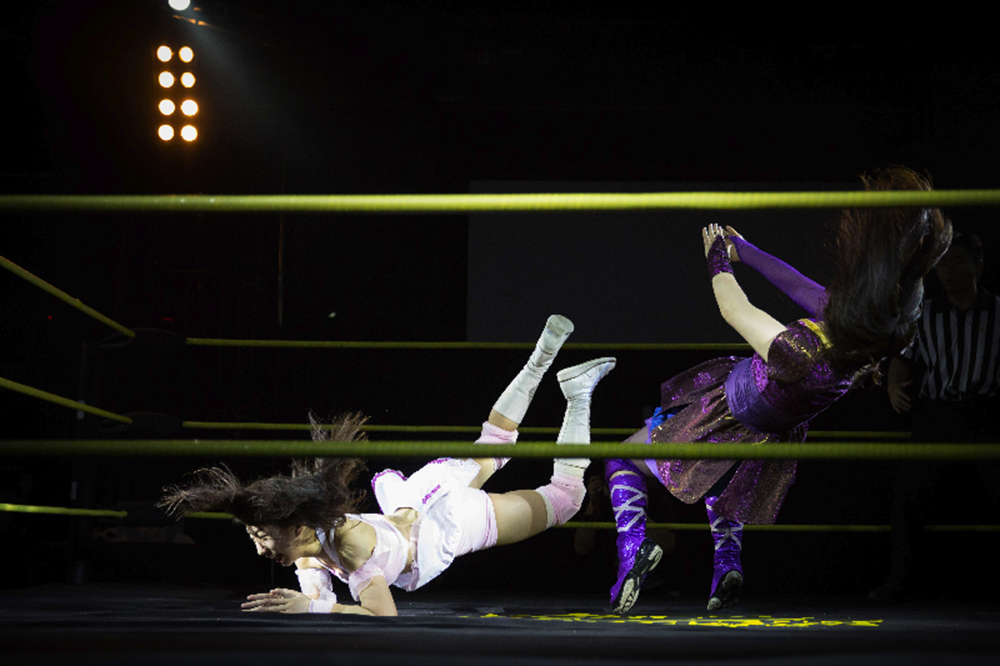 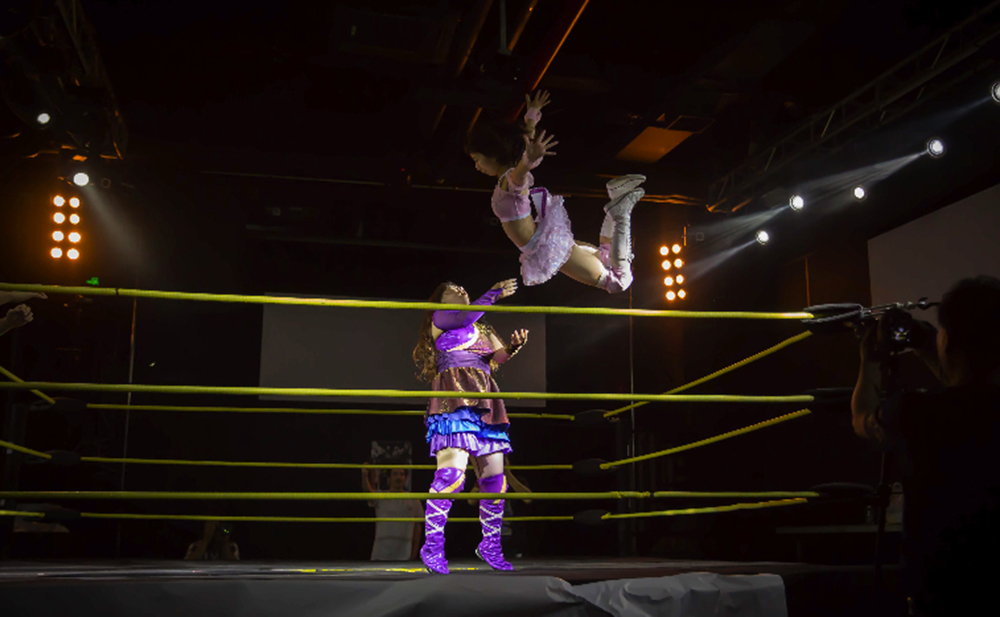 Japanese wrestlers Emi Sakura and Riho fight it out in CWF’s recent promotion in Shanghai.  Images courtesy of Eric Garrison

Despite commanding a massive online following, world leading US behemoth World Wrestling Entertainment (WWE) had until recently been curiously inactive in China. That all changed this summer when the $650m corporation staged a major PR campaign in China, bringing over legends John Cena and Triple H, ostensibly to scout new Chinese talent, but mostly to generate buzz around a live event in Shanghai in September and to announce deals with online channel PPTV to screen its US shows in Mandarin.

WWE’s existing popularity provides a strong foundation upon which local pretenders can develop their own on and offline wrestling content. One of their many challenges will be attracting a local audience that has probably never attended a live show before and, once they are there, generating atmosphere among a small crowd that has never participated in the pantomime before. 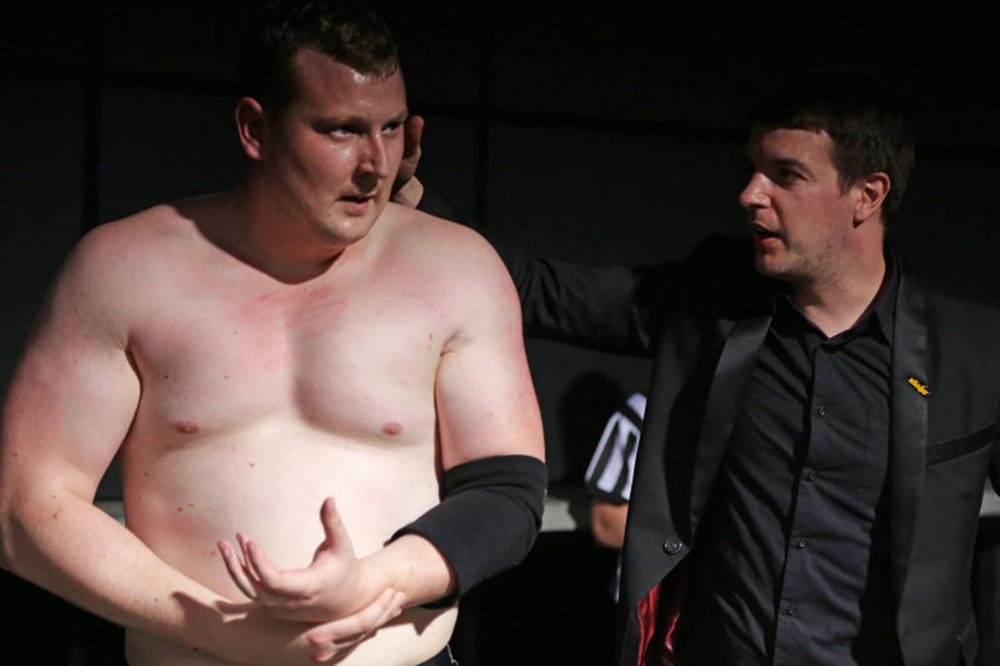 The key, says Gomez, is to develop characters to which fans can relate. “Emulating a WWE show for a Chinese audience will not make a successful promotion. Instead, his plan is to bring pro wrestling with “Chinese characteristics”. “China has 56 minority groups and iconic things that all make great gimmicks,” he says, “I watch Running Man and Baba Qu Na. Those elements can be incorporated into pro wrestling to catch a massive audience.”

Gomez doesn’t worry about competition – after all, many wrestlers are shared between promotions – but stresses his character-driven approach differentiates MKW from the rest, “[CWF] really prefer the Japanese style… It looks more like a traditional sport. [We] care more about telling stories.” 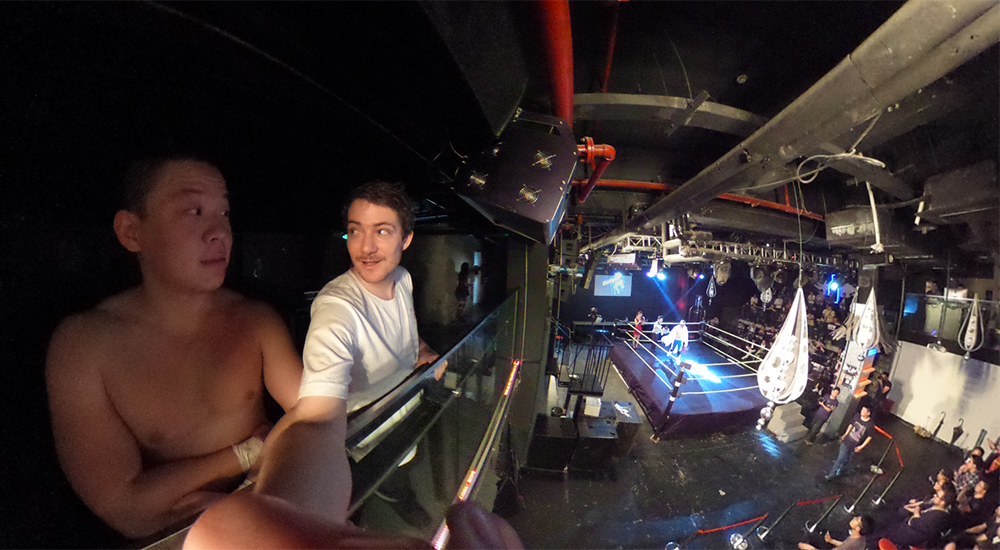 A Yao Ming In The Ring

If domestic wrestling is to gain traction with the local audience, it will need its own superstars. Seeking to find a ‘Yao Ming in the ring’, Japanese federation IGF, run by WWE hall of famer Antonio Inoke, opened a dojo in Shanghai in 2013. IGF soon claimed it had found a future icon in the form of Wang Bin, a 20-year old gym coach from Anhui. Wang promptly left for Japan to receive a higher quality of training, just The Slam had done in Korea a decade earlier.

The move paid off. Wang recently became the first Chinese athlete to sign a development contract with the WWE and is currently training at the WWE’s Performance Center in Orlando, Florida, hoping to one day become the federation’s first fully-fledged Chinese star. 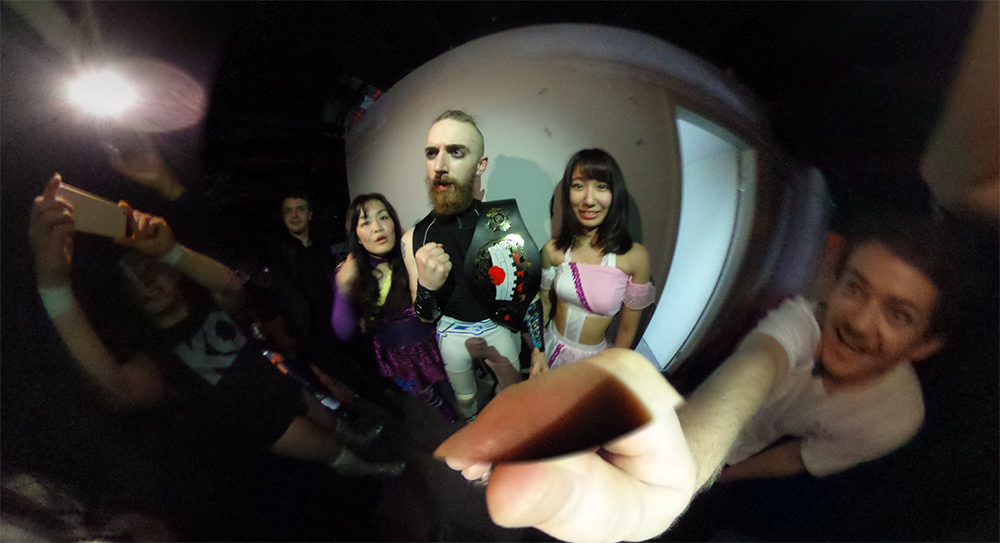 Yet for all the marketing fanfare, WWE will struggle to find more Chinese wrestlers any time soon. Most estimates suggest there are currently only about 20 wrestlers in the entire country, and a shortage of training facilities or world-class coaches means little new talent is emerging.

The scarcity of resources is causing the quality of current shows to suffer.  MKW headliner Dalton Bragg explains, “If you see wrestlers who train three times a week and wrestle once a month, the matches are 100 times better than when they show up twice a year and haven’t trained at all.”

Chinese promoters are also having difficulty maintaining the presence needed to build a fan base. “The key to staying power is staying visible”, says Bragg, “Companies do a show and then drop off the face of the earth for 6 months. There’s no fan retention.”  Running regular shows is easier said than done though. Alongside the financial barriers, Gomez explains it is difficult to explain wrestling to the older generation and therefore difficult to find suitable venues.

The current crop of promoters faces a long and difficult road. CWF and MKW are seeking to keep up the momentum with live events in Shenzhen in September and Inner Mongolia in November respectively, while the WWE increased presence should help by inspiring more athletes, investors and entrepreneurs to get involved in the sport.

For now though, Chinese wrestling is fueled by the passion of its promoters. “The more matches we do, the more I come to love wrestling,” says MKW’s Nikk Mitchell, “I feel like I’m getting to the heart of what makes wrestling popular, and that’s so exciting.” 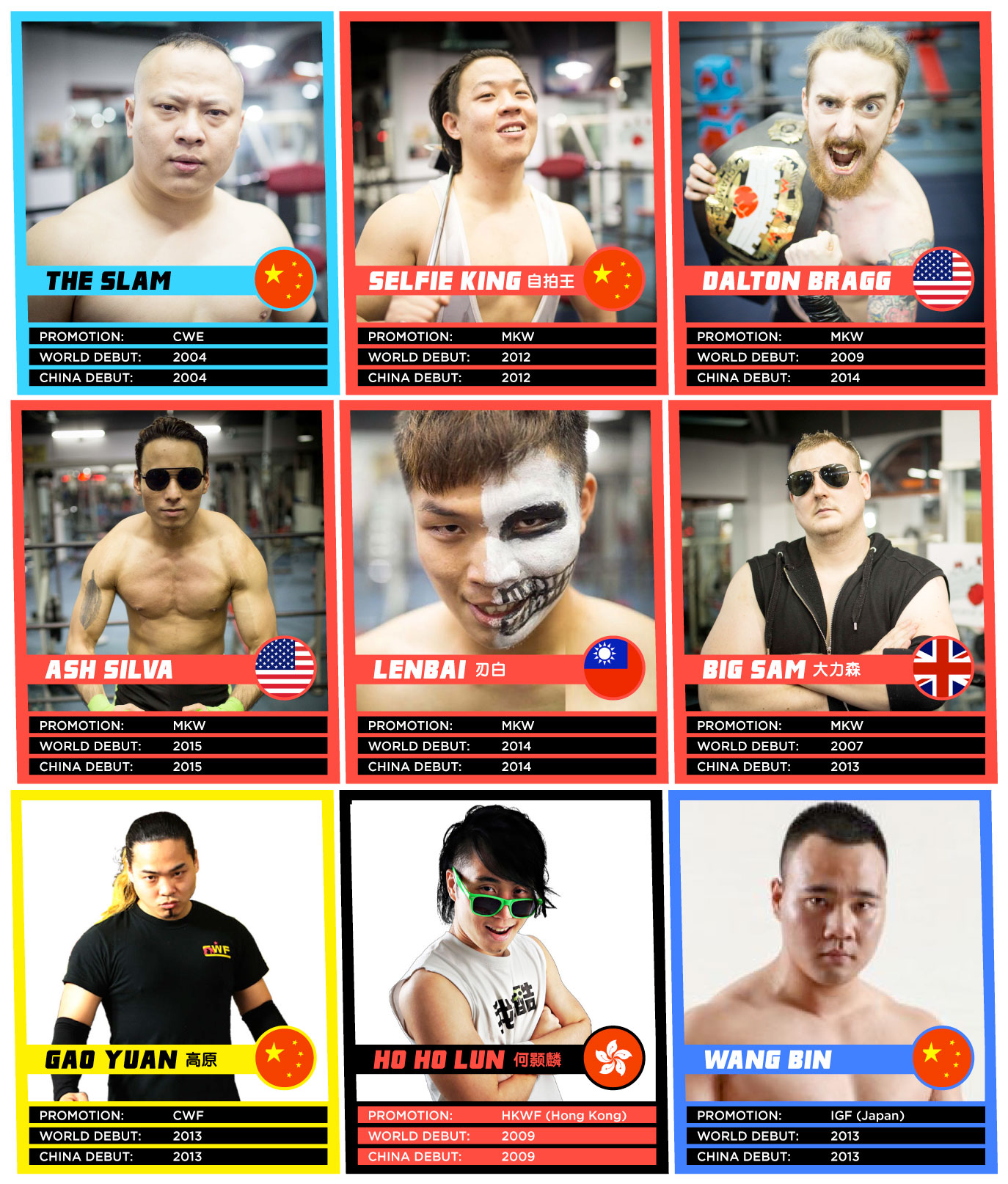