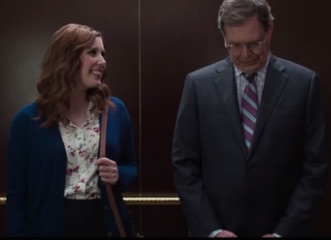 In a bit of outside-the-box marketing (okay, way more than a bit), Audi has collaborated with the team behind the upcoming blockbuster Fifty Shades of Grey to produce a hilariously-awkward comedy sketch, which self-awarely parodies the notorious, superfluously sexual reputation of both the Fifty Shades film and the bestselling book it’s based on.

Audi, whose cars will appear in Fifty Shades of Grey under a much sexier light, sponsored this viral video starring Saturday Night Live’s Vanessa Bayer as a Fifty Shades fan on an elevator, all too eager to find someone to reenact scenes in the film with, making the men (and women) who share the elevator with her verrrrrry uncomfortable in the process. The clip was the brainchild of the agency Venables Bell & Partners. Fifty Shades of Grey releases worldwide on Valentine’s Day.

We here at P.I.G. have also collaborated with Audi, for a TV Spot that is as sleek and extravagant, if not as risque, as anything in the world of Mr. Christian Grey. Check it out here!